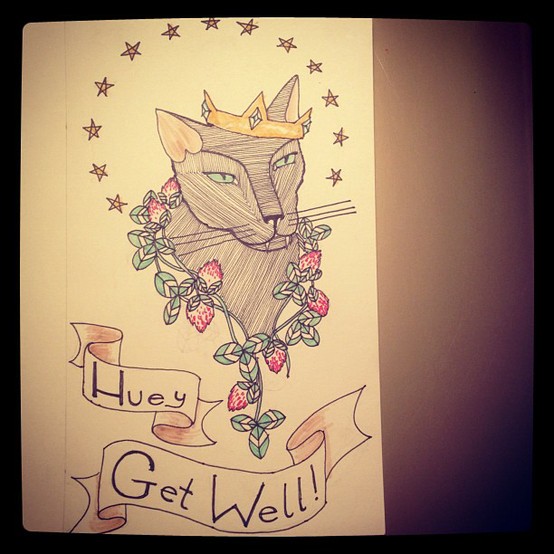 Those of you who follow me on twitter will know we rushed Huey to the catmergency room on Sunday. His back legs stopped working & they confirmed a blood clot, and recommended euthanasia. HELL NO! we said, and he’s home now and resting.

This is a cat who adopted me. He “belonged” to my neighbors, who named him & basically turned him loose. Right before I moved into an apartment in Oakland (4 years ago) my landlady had him fixed because he was establishing his reign of cat king over her cats in her backyard. 6 months old then, he was lanky and feisty, but we bonded right away and he turned my tiny bathroom window into his own personal cat door in and out of my apartment.

& then, the neighbors moved away, and took Huey with them. A week and a half later, I heard a crying at my back door. It was pouring rain, and when I opened the door Huey ran in, went straight to the trash can and started eating old popcorn out of it. He looked like he’d lost about a 3rd of his body weight. He’d walked god even knows how far, for a WEEK AND A HALF, to get back to my apartment. So that settled it.

Sunday night, the situation did not look good. Cats who survive the first 24 hours of a clot usually only live about 2-6 months after – it’s usually caused by severe heart disease and by the time clots are being made, it’s bad news. As it turns out, Huey has a heart defect, something the doctor had never seen before, and his heart was healthier than they expected. They also told us he is the strongest/best acting cat they’d ever seen with this issue. As of this morning, he’s already trying to propel himself around and regaining movement in his back legs. So. We are super hopeful and guardedly optimistic that he has a little more time with us, at least. We’ll see how the kitten rehab goes. According to the internet, the people who did not listen to the vet and euthanize had good luck getting their cats walking again.

In all of this, Sean has basically been the best kitten dad EVER. Pill feeding, bladder squeezing (ew) & general all around calmness while I burst into tears watching Huey hop-drag himself around. I am crap with this stuff, and he is a champ. I think about all the health stuff my parents went through with my brother, who was really sick as a baby, and it boggles my mind that people are strong enough to handle everything life throws at them.

And now I’ve written a really long blog post about my cat, securing my crazy cat lady status for all eternity! Cats!