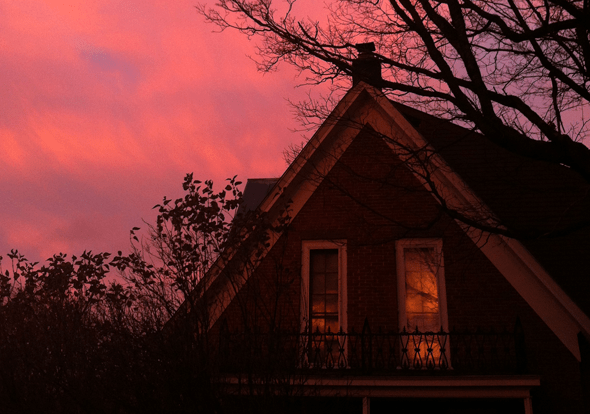 When we moved in to a house built in 1836 I fully expected some ghost happenings. But the house feels cozy, and the main extent of ghostly activity is each of us thinking the other has said something or called out when we haven’t.

On Thursday night we were settling in to sleep when I heard something on the stairs, a kind of dragging step that I’m used to hearing from Huey, with his one lame foot. Except heavier. And Huey was next to me. As was Sean, and Little Cat.

Ummmmm, what was that? Sean had heard it too, and Little Cat ran to the stop of the stairwell and looked expectantly at whatever was coming up.

At this point, we’re thinking someone is actually in the house, so we weapon up and start creeping around like ninjas, kicking in doors. The house was empty. We go back to bed. 20 minutes later, there it is again. I flipped the lights on, ran downstairs, and nothing. We went to sleep feeling verrrrrry nervous but too exhausted to care.

3 days later, Sean is downstairs when a cat toy rolls across the (not slanted) floor, right to Little Cat. Sean comes upstairs and looks in on Huey and I sleeping, then back downstairs where Little Cat is playing with his toy and looking up expectantly at someone who isn’t there. Again.

So now it’s Halloween. Will our ghost return tonight? Eeeeeeeek.